Countering the “We Use It, We Need It” Argument for Oil 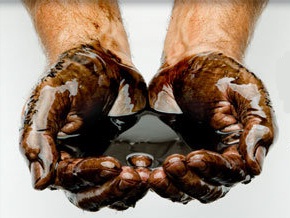 Nothing derails and muddies an argument faster than the viscous sludge of oil. Supporters of oil view it as a source of wealth and riches. Oil and natural gas are resources that power our cars and cities and provide good jobs for hard-working men and women. Oil is no longer the hostage-child of unscrupulous sheiks but is rather a home-grown asset, as American as apple pie, as Canadian as a frozen outdoor rink. Oil equals independence and freedom. Community activists point out that burning fossil fuels pollutes and harms the environment, leading to disastrous climate change. Yes, the oil people say, fossil fuels have dangers, but we all use it and we all need it. How can you criticize oil’s dangers when you are as dependent on its benefits as everyone else?

Here’s where the argument derails. The green movement finds itself in an impossibly compromised position. Most conscientious and well-meaning people would have to admit that they are consumers of oil arguing for the abolition of oil. We want to protect our homes and communities and the land and waters around our communities, but oil has become essential to the life that we’ve constructed for ourselves. In short, our hands are dirty and we’re trying to appear like saints. It isn’t possible.

There’s a way out of this bind. If we think only in terms of either/ or, we’re in trouble. The same is true if we think there is only one solution. We need multiple solutions. We’re living in a period of transition. Everything is hybrid, a little of this and a little of that. There is no purity. Of course our hands are dirty. We created the problem. As on-going consumers of oil, we perpetuate the problem. But we can lessen our dependence on oil by exploring other options. Oil is a tool, it is not a shrine. It is one tool among many. If we find better tools, like solar power and electric cars, than we’ll use them. Our economy will not collapse once we’ve found cheaper, cleaner and more efficient tools. Just the opposite.

I suspect too much mental energy is wasted on debates over the oil industry. We don’t need to kill the industry. We need to embrace and invest in alternative energy solutions. We do not need the government’s permission to buy a solar panel or to purchase an electric car. As millions of ordinary people start acquiring these new tools, as money gets redirected and new industries arise, no smart young person or shrewd investment manager will seriously consider the field of fossil fuel as an employment or growth opportunity. Oil will be seen as a risky investment, an old tool for a time that is quickly fading.