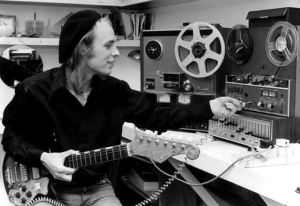 In 1975, British musician Brian Eno created a ground-breaking album combining catchy pop riffs with experimental ambient sounds. He called it Another Green World. The music  sounded like a soundtrack for aliens or music for astronauts orienting themselves to new physical laws. There were few lyrics and songs had titles like “Sky Saw,” “Sombre Reptiles” and “Spirits Drifting.” And of course, “Another Green World,” a song that painted not a picture, but a blinding expansion of vision. Listening to it, I felt as if I was emerging into an  open meadow from a dark woods or suddenly discovering another habitable planet after years adrift in space. It’s one of the great dreams of science fiction or any fiction, to escape and find a better place. I grew up listening to Eno’s music. So I adopt his title, with a minor change, to suggest our challenge today is not to leave the planet but to see it differently and behave differently toward it.

Our environment faces many threats that require action. But what can one person do about it? This blog is an attempt by a small group of friends to answer that question. Trying to live sustainable lifestyles, sharing information, experiences, recipes and tips. We hope this blog is of some use and we invite you to join our on-line community.